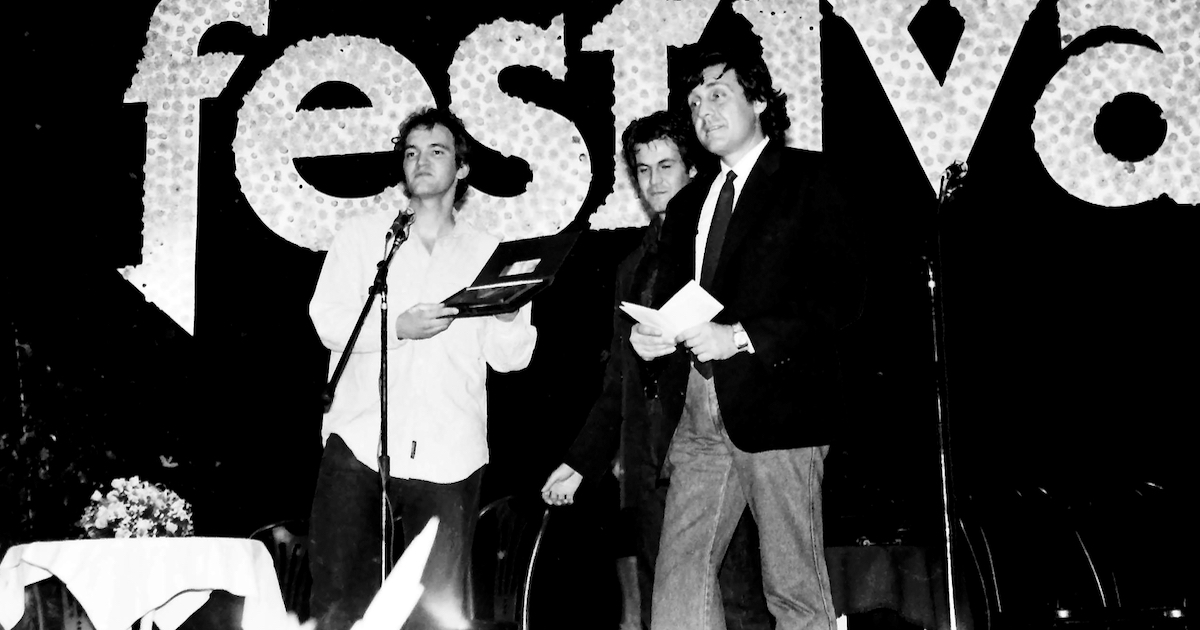 Davide Rapp and Michele Boroni re-evoke a heady season: the 1992 Noir in Festival and the revelation of Tarantino and his Reservoir Dogs in competition that year. The evening event this year celebrated that edition and ended with a message for Noir from the filmmaker, now firmly installed in the movie hall of fame.
An article by Vittoria Villa

Once upon a time there was Quentin Tarantino, at Viareggio in 1992. He was a revelation at the Cannes Film Festival with his controversial Reservoir Dogs, which would become a cult classic. Tarantino then presented his first feature film to audiences at large as the opener of Noir in Festival in the early ‘90s, and it was this unforgettable event that was feted on Sunday evening at IULM University. At their side to bring that moment to life, Marina Fabbri and Giorgio Gosetti had called upon Michele Boroni and the director Davide Rapp. The former, author of the story in blog format, and the latter charged with distilling the memories in the form of images. That’s the genesis of C’era una volta a Viareggio, a documentary devoted to Quentin Tarantino’s unforgettable appearance at our 1992 edition. It’s a trip down film memory lane for those who were there to experience what is still the dream of every cinephile today: direct (and daily) contact with a filmmaker who is writing film history before their eyes. It’s a never-before-seen view of Quentin Tarantino, minus that mystical aura that global fame has envelopped him in over the years. Who was he really, then? A young film aficionado himself, one who never missed a screening or a title in a retrospective, who fell to his knees in adoration of the filmmaker Michele Soavi, director of Deliria, a favorite of Tarantino’s. The anticipation ahead of the screening of Reservoir Dogs was palpable.

Yet no one dreamed that the screening at Viareggio would be one for the books, and that Tarantino’s feature film debut (renamed Le Iene in the Italian version) would turn into a contemporary classic. Gosetti describes it as a highly theatrical film, even Shakespearean, brimming with Tarantino’s love of master filmmakers from Akira Kurosawa to Jean-Luc Godard, whose styles he would continue to pay homage to in later films. The truth is, Tarantino has never disguised his avid interest in the history of film. And this trait of cinephilia in his personality is what emerges from Rapp’s documentary, showing us the filmmaker and his iconic stature from a surprising new perspective. Not even the Palme d’Or at Cannes in 1994, for Pulp Fiction, would erase the director’s fond memories of that Noir in Festival that he’d been so excited to attend. “Viareggio!” yelled an amazed Quentin Tarantino years later in the United States, when he ran into journalist Elena Torre, who’d been at that screening of Reservoir Dogs in 1992. Fast forward to our evening event in 2022: at one point, Gosetti got emotional as he read a message written by Tarantino himself, directed at the festival and the festgoers of today, in which the auteur spoke of his “sweet memories” of a “festival that took him in when he was still a nobody”. A touching tribute and a sign of devotion to a festival that, in its own small way, had had a hand in spreading the name of a filmmaker who is founding father of contemporary film.