You don’t say ‘no’ to Scerbanenco 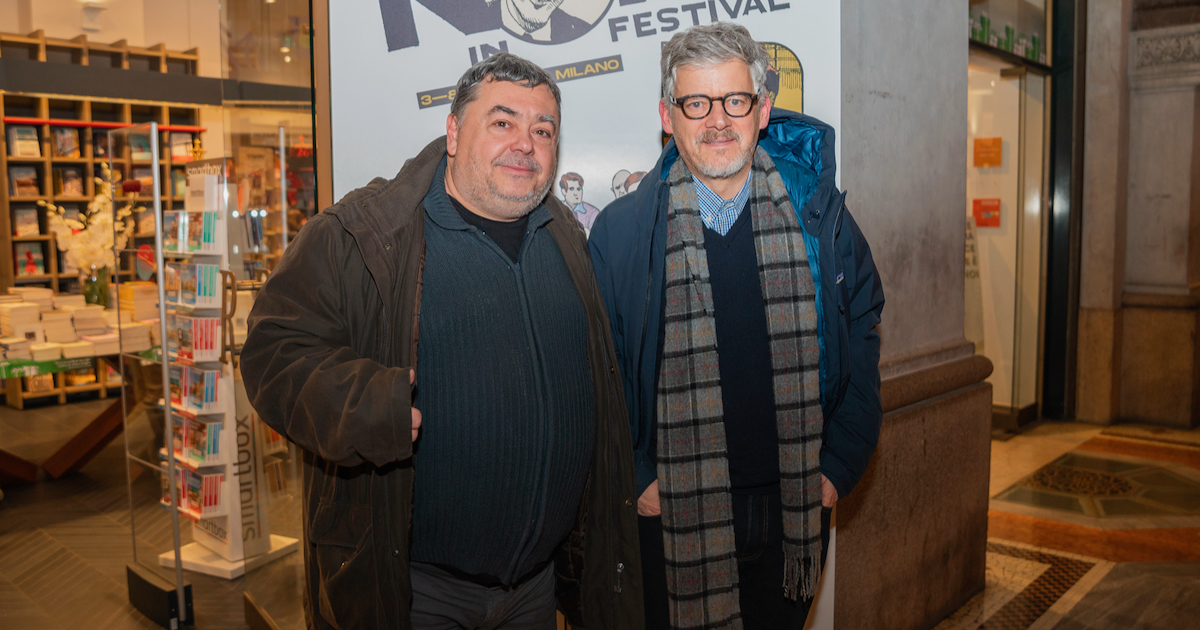 Paolo Bacilieri, the artist behind the poster for the 2022 Noir in Festival, presented his new graphic novel, Venere Privata, based on Scerbanenco’s first novel featuring Duca Lamberti. The poster was a commission he couldn’t refuse.
Article by Ariel Conta

The face of Noir in Festival this year sports the chiseled features of Quentin Tarantino and his Reservoir Dogs, as reimagined by cartoonist Paolo Bacilieri, the fest’s guest at the Rizzoli Bookshop to discuss the publication of his graphic novel Venere Privata (Oblomov).

In response to promptings from moderator Luca Crovi, Bacilieri admitted that underlying the poster for the 2022 edition was “the desire to create ambiguity between what is supposed to be a single image and the polymorphism of comic books.”

This hankering to disassemble and rearrange the space on the page – white, mute, and compact – into a kaleidoscope of stripes, squares, and cartoons – is evident in Venere Private, graphic novel as well. It is based on Giorgio Scerbanenco’s novel of the same name, hence the task of turning words into images. A challenge that Bacilieri didn’t think twice about taking on, as he told Crovi: “It was Scerbanenco who chose me. I was at work on a biography of Piero Manzoni when Igort, as editor of Linus, asked me to turn Venere Privata into a graphic novel. An offer I couldn’t refuse.”

A further complication was the setting of the story, temporally and spatially speaking: portraying Milan in the 1960s and the atmosphere of the time by adapting his own perspective in the here and now of 2022. It was a little like getting new glasses or contacts after wearing the same lenses for years. As Bacilieri himself put it: “Milan may well be the real protagonist of the story. Scerbanenco was very accurate in his portrayal of the city; almost physiognomical, by way of fidelity to the place names. This lends enormous credibility to his novels. Thanks to the concreteness and realism of the how and where, the characters become real as well. What I was seeking to recreate in my graphic novel adaptation – in my Scerbanenchean Milan, was that certain tenderness in 1960s black & white film.”

It follows that, if the realistic rendering of the setting is connected to the reality of the characters inhabiting it, then a solid, well-structured urban backdrop asks for just as solid a human character. To this end, Bacilieri turned to the iconic tradition of Duca Lamberti – the famed protagonist of A Private Venus, and the first actor to play the character, Bruno Cremer. “Physically inhabiting a character is a very tricky undertaking that often evolves while a work is in progress. […] It was the film by Yves Boisset, starring Bruno Cremer, that set me in the right direction.” Still, something was missing in Boisset’s Lamberti: “He was too well-groomed, too handsome,” Bacilieri went on. “But there’s another film from 1965, The 317th Platoon, in which Bruno Cremer plays this French sergeant in Vietnam – and he’s Duca Lamberti! Perfectly in line with what I had in mind for the character.”

Actually, part of a graphic novelist’s job is being a director: the line between what is and what can be represented runs along the border between words and images. “It’s almost a game of positives and negatives, this adapting a literary work to produce a comic book. Scerbanenco exploits his own forte – the words – to the hilt, and is very painstaking in his descriptions of violence in a plot as well. As a graphic artist, my job is to turn words into images; I don’t show what Scerbanenco described in words, I show the results of that description.” A limit, then, to be tested, at myriad strokes of Bacilieri’s pen.