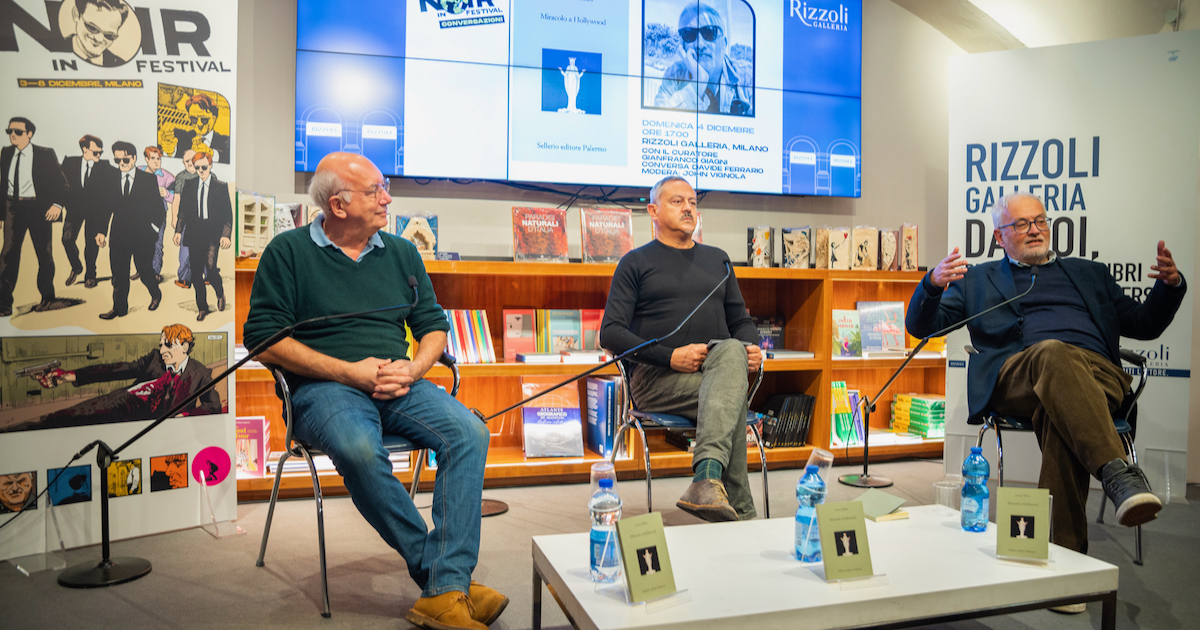 At the Rizzoli Bookshop, Gianfranco Giagni, curator of the Italian edition, and filmmaker Davide Ferrario talk about The Unthinking Lobster, aka Miracolo a Hollywood, a play by Orson Welles.
Article by Vittoria Villa

The Unthinking Lobster is a “labor of love” by a great magician of cinema”, according to John Vignola, moderator of the talk held yesterday at the Rizzoli Bookshop with guest speakers Gianfranco Giagni, translator of the Italian edition, and director Davide Ferrario. The bookshop was the venue of choice and Noir in Festival the perfect occasion to present the print edition of the play straddling two worlds, theater and film (hence eminently Wellesian), written by master filmmaker Orson Welles. Miracolo a Hollywood (Sellerio) contains his play from the 1950s, openly satirical, that was never published in the United States. A story, to Giagni’s mind, “that would be right for Rome, but not Hollywood.” How so? The main character is an Italian filmmaker summoned to Los Angeles to make a neorealist film. He embraces the style wholeheartedly, to the point of picking the secretary of the Hollywood producer to play the female lead, and real patients as extras. Miraculously (hence the Italian title), the patients are healed by the above-mentioned fake actress/saint. The play was long thought lost and never published in English, and its core theme is the dialectic between religion and cinema, which, according to Ferrario, makes it remarkably contemporary.

By his own admission a “disciple of Welles”, the director of After Midnight discusses with Giagni the satirical vein that The Unthinking Lobster makes no attempt to hide, revealing the unmistakable, cynical voice of the creator of Citizen Kane. What also emerged from this fascinating and wide-ranging talk was the versality of a filmmaker who could not be “pigeonholed” into a single genre, unlike some of his contemporaries (such as Hitchcock, identified with mysteries and thrillers, as mentioned by the speakers). Indeed, an entire mythology comes to light, springing from the very fragmentation of the director’s talent into different arts: as Ferrario puts it, Welles “became easily enamored of his various projects, and, just as easily, abandoned them.” Miracolo a Hollywood tempts Italian readers to further explore the nature of a filmmaker considered impenetrable in many ways – one who became an icon of film heritage for this very reason. After all, as Ferrario explained, “Legends are born of uncertainty.” Something Orson Welles knew all too well.