Women in black: the freedom to create 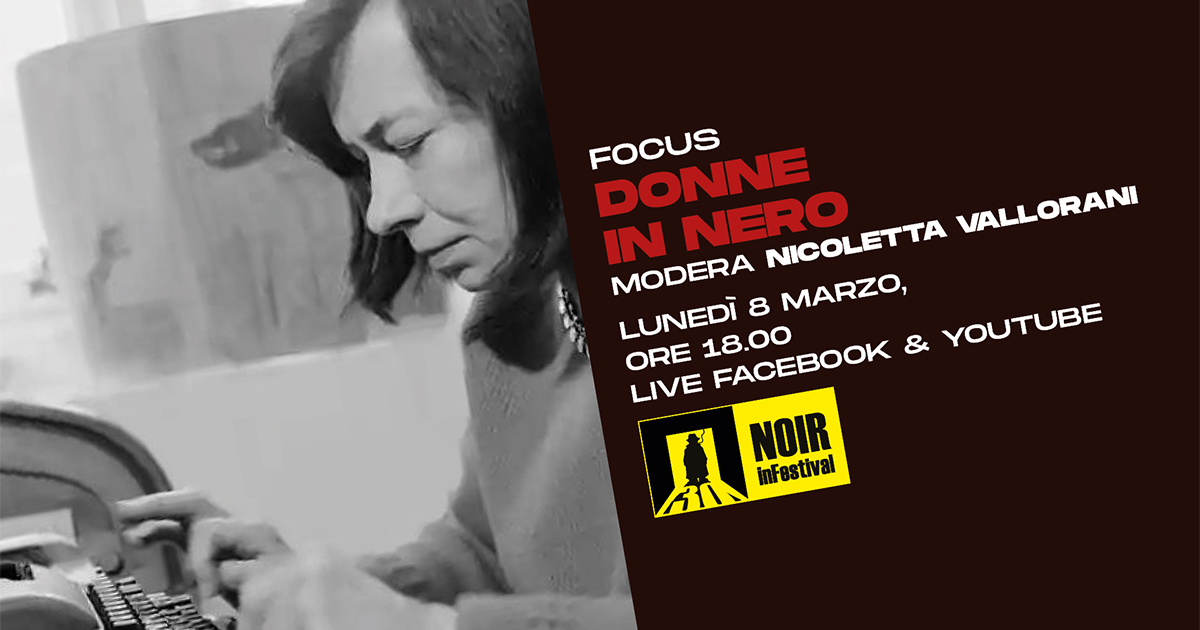 The five speakers at the focus session moderated by Nicoletta Vallorani discussed their original ways of being authors and generating female characters, drawing on both their life experiences and their imaginations.

Women in Black was one of the most highly-anticipated events at the Festival. Marina Fabbri sat down with one of the six women on the panel, Antonella Lattanzi, to stress the importance of an event devoted to female creativity and scheduled unabashedly on the 8th of March, International Women’s Day. Fabbri also drew attention to the symbolism inherent in their meeting, at least the two of them, at the Red Feltrinelli bookstore in Rome, in a sign of continuity with the past (and, it is hoped, the future), with Noir held in Milan and its Feltrinelli the inimitable venue for the literary side of Noir in Festival. But this time around, sadly, the other women writers invited to the session took part from their homes or offices: Margherita Oggero, Francesca Serafini, Rosa Teruzzi, Grazia Verasani, and, as moderator, Nicoletta Vallorani.

As Marina Fabbri reminded viewers as she summed up the speakers’ biographies, “our guests are women writers who are quite different from each other yet share a certain literary kinship.” A discussion about the noir genre, “not usually the province of women,” added Nicoletta Vallorani, “meant that we all had to be able to get around the obstacles, break with the past, and find solutions in a territory that, for us, is largely uncharted.”

“I personally have always loved mystery stories, and at one point in my life I decided to try my hand at writing one, “Margherita Oggero revealed. “The truth was, I was that scared of novel-writing that I chose the mystery genre so I had rules to follow. Later I would break free of those constraints and create my stories freely. In fact, in noir fiction by women,” Oggero went on, “I noticed they were able to seize on secondary aspects and come up with original takes on the stories they told. Whereas the same genre tackled by men writers, even the best of them, tends to avoid taking detours and getting off the beaten track.”

“In all the books I’ve published, even those with nothing to do with noir, I get the urge to write about women characters, especially the unconventional ones who break the rules, and dwell on their emotions, their intelligence, their disasters and eccentricities,” began Grazie Verasani when it was her turn. “Since I know women better than men, it’s easier to write about them. Giorgia Cantini [one of Verasani’s best-known characters] came into being in 2004, at at time when I could feel that Italy lacked a detective written by a woman. I wanted mine to be a little scruffy, but not overly so; a person with her own preoccupations, yet identical to those of any other woman; with her own contradictions, yet a figure impossible to compare to American female sleuths. I did want her to be ironic. Giorgia Cantini has a dark sense of humor, since she’s a pretty dark character. In fact, she was inspired by my adulation of Raymond Chandler and Patricia Highsmith.”

“I myself had no choice,” explained Rosa Teruzzi, as to her approach to the noir genre. “I’ve been a crime reporter all my life, and when I turned to novels, I vowed I would never do mysteries. What do I write, at the end of the day? Mysteries only!” Teruzzi went on, “I like to depict ordinary people when I write. My characters aren’t policewomen or judges, and this is so I can avoid all the technicalities I have to deal with on my day job. I liked the idea of a family of women living hard by the train tracks in the signalman’s house, or a flower seller investigating on her own, maybe with the help of a journalist. No true life stories will ever appear in my own books, since novels are the place I can be free and invent my own narratives.”

“There are a lot more than three mothers in my novel. I wanted to explore the many ways of being a mother and even a father,” explained Francesca Serafini as she described her novel Tre madri. “If you think about it, the relationship between parents and children should be straightforward, natural. Yet it’s the hardest thing since we don’t get a how-to manual, do we? And even if we did, it would dictate only one way of being a mother. And as to what Rosa Teruzzi told us, let me add that I, too, chose to write a novel as a space where I could be free, even though it’s like everything I’ve ever done and all my writing experiences have flowed into the book itself.”

Closing out the focus session, Antonella Lattanzi shared her thoughts on her novel Questo giorno che incombe: “I was afraid I wouldn’t be able to write about being a mother the way I wanted to, so the readers would understand. And that really frightened me since I don’t have children myself, and while I was writing, I wondered if I was the right person to depict this greatest of mysteries which is being a mother. The truth is,” Lattanzi admitted, “I don’t like telling stories that have to do with me. After all, I have to live and put up with myself day in and day out, and if I can experience the life of someone different from me, I’m happy to. In all the novels I’ve written, the moment I love is when I get out of my head and into someone else’s.”