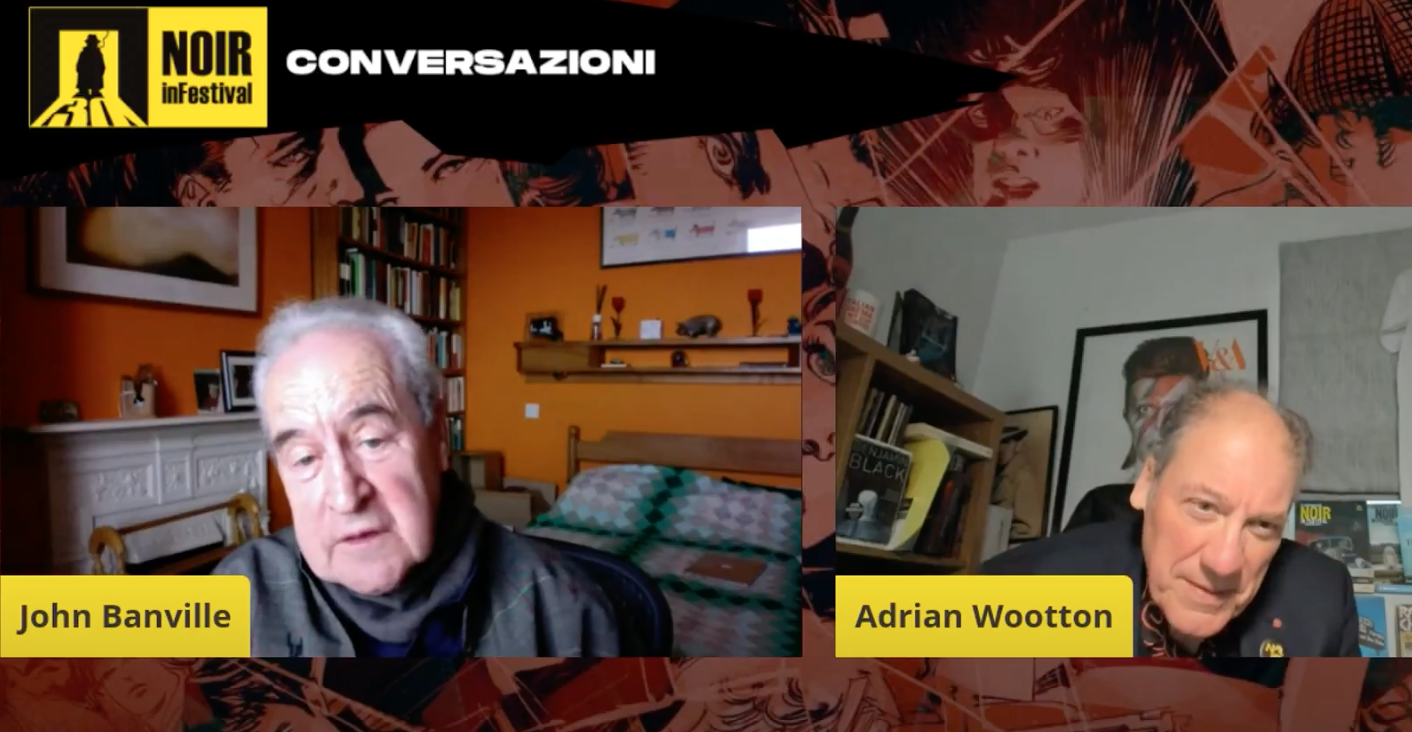 His earliest literary influences, his later infatuations, his defying of labels and genres
The author of Snow opens up to Adrian Wootton online.

“I’ve seen interviews with you where you’ve talked about your writing from when you were a relatively young boy, and the kind of literary influences you’ve referenced: Joyce and Dubliners, and the impact it had. But I wondered, apart from those heavyweight writers like Beckett and Joyce, and others like Henry James, I wondered: crime fiction, when did you first discover it? What did you really like and resonated with you? “. This was the question from Adrian Wootton that got the conversation rolling with John Banville, invited to Noir in Festival as recipient of the 2020 Raymond Chandler Award. Banville also seized the occasion to present his novel Snow [Delitto d’inverno], in the Italian edition published by Guanda, like all his books.

“Well, I’m not just saying it because of the award, but Raymond Chandler was one of the first crime writers I read. My older brother gave me The Long Goodbye when I was about fourteen, fifteen. And I discovered, to my great delight, that crime fiction could be written in high prose style. Chandler’s prose is wonderful. And I loved it that Chandler didn’t give a damn about plot. As he said himself, ‘I don’t care who killed Professor Plumb with a lead pipe in the library, I really don’t. The thing that matters is the style.’ This thrilled me. And I also read, of course, the English lady novelists of the 1930s, 40s and 50s, Agatha Christie, Margery Allingham, many of them. Ladies in flowered frocks with murder in their hearts. And I admire them immensely. It seems to be very little remarked how successful women crime writers were in those days, which was not true with mainstream fiction.

“Then I discovered people like James M. Cain. The Postman Always Rings Twice is an extraordinary book, beautifully done, beautifully carried off. And there’s another one of his called Serenade. It starts off with this rogue opera singer on the run in Mexico. And he and the girl at the start of it end up on a motorcycle and it’s raining very hard, so they drive into a church and they park in the church and stay there quite a while. I was just thrilled by this. I think it would make a superb film.”

Why, after a serious of superb novels, Wootton asked, had Banville felt the need to veer into the hard-boiled? What had triggered the author’s deciding to do it?

“Well, it’s very simple. Georges Simenon is the father of Benjamin Black, the crime writer that I became. I had never read Simenon, I had assumed it was just pulp writing. Then a friend of mine, the philosopher John Gray, told me that I really should read Simenon. And I began to read Simenon and I was just carried away. I now regard Simenon as one of the great writers of the 20th century. No one can set a scene like Simenon does. So I thought, if he can do these superb books with a very small vocabulary, very strong on plot, very strong on character, then I would try it myself. I have tried, but I would never be Simenon, because I discovered recently, after reading him for many years, I discovered that that secret of Simenon’s work is that there’s no ego in the books. Simenon is nowhere in his books. He’s simply a recording eye, the camera eye. I couldn’t do that to save my life – I’m too much of an egomaniac, I suppose. I’m a writer: I’m fascinated by the way my own brain works. Simenon wasn’t.”