LA TERRA DELL’ABBASTANZA - BOYS CRY
by Fratelli D’Innocenzo
Italy, 2018, 96’, color, DCP
screenplay
Fratelli D’Innocenzo
cinematography
Paolo Carnera
editing
Marco Spoletini
music
Toni Bruna
sound
Maricetta Lombardo
production design
Paolo Bonfini
costumes
Massimo Cantini Parrini
cast
Andrea Carpenzano [Manolo]
Matteo Olivetti [Mirko]
Milena Mancini [Alessia]
Max Tortora [Danilo]
Giordano De Plano [Simone]
Michela De Rossi [Ambra]
Walter Toschi [Carmine]
Luca Zingaretti [Angelo]
producers
Agostino, Giuseppe
Maria Grazia Saccà
executive producer
Ivan D’Ambrosio
production
Pepito Produzioni
with Rai Cinema
with the support of
MiBAC
Regione Lazio
world sales
The Match Factory
Mirko and Manolo are best friends and live in the suburbs of Rome. They both live in poor conditions with their single parents, are still in school and struggle with occasional odd jobs to make ends meet. Together they share dreams of women, of sex and money, of a better life to come. After killing a man in a hit-and-run one night, they get involved with the local mafia and their lives change dramatically. Soon they find themselves doing the dirty work for their new bosses and have fresh blood on their hands. But lured by the dreams of easy money and illusions of a thriving career, they fail to realize the consequences of their choice. Life in the underworld becomes exceedingly tough and Mirko and Manolo soon disconnect from family and former friends as they engage on a downward spiral, a pathway towards darkness.
"Through this film we wanted to show how awfully easy it is to get used to evil. The two main characters are young guys who kill a man accidentally and take the easy way out by not coming clean, but the event will come back to haunt them. So they start using feeling guilty as a way to cushion themselves: they think it’s easier to accumulate more dehumanization than to cleanse themselves of what happened. When the opportunity presents itself to get into criminal activity, they see another option magically materialize, the one they think they need: getting used to evil, to the point of being numb to everything, including their consciences. In a world in which suffering is another word for weakness, the two kids will keep raising the bar to see how much they can stand and how far they can take pretending to feel nothing. Alas, they’ll learn the hard way: you can keep faking to the bitter end."
Directing and writing duo Fabio and Damiano D’Innocenzo (Rome, 1988) spent their childhood on the outskirts of Rome painting, writing poems and taking photographs. Without any formal film-making training, they have created video clips, films for television and the cinema as well as a theatre play. Their debut as feature film directors La terra dell’abbastanza (Boys Cry) is screening in Panorama.
2018 La terra dell’abbastanza 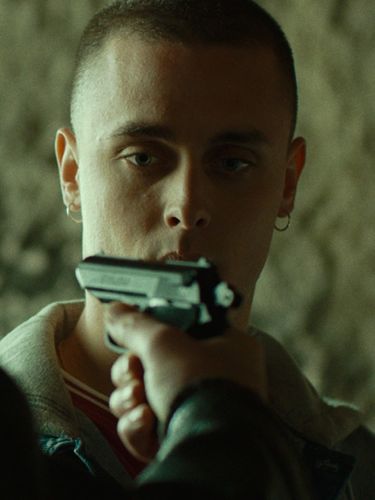