Shards of noir and the art of kintsugi
To celebrate the thirtieth edition of Noir in Festival, which will be held from March 1st to 6th, 2021, in Milan, the festival has tapped the talented Mario Alberti, the world-famous illustrator and comic book artist from Trieste, who has worked with Sergio Bonelli Editore, Panini Comics, Star Comics, Delcourt, Glenat, DC Comics, Marvel and IDW, and is the artist behind the posters for Trieste Science+Fiction from 2013 to 2015.
After the zombies revisited by Gigi Cavenago in 2018, and the gloomy urban feel of the poster designed by Lorenzo De Felici in 2019, another master of the comics genre joins Noir’s hall of fame (which includes the likes of Hugo Pratt, Lorenzo Mattotti,  Bill Plympton, Charles Schultz and Mojmir Jezek). Alberti has chosen to celebrate our anniversary with a poster that references the iconography of an entire genre, from Sherlock Holmes and Quentin Tarantino to Carlo Lucarelli and Margaret Atwood (and many others we wonder whether you’ll catch). The image captures an ensemble of personalities seen through cracked glass, the shards framing some of the icons thanks to which Noir has become a festival of film and literature that has stood the test of time, a mirror held lucidly and wryly up to reality.
"It’s much more than just a tribute, a guessing game or a celebration," the curators of communications for the festival explain. "The poster is really a grand metaphor for the noir genre itself, one that has entranced millions of audiences over the course of a century but its fragmentation is eminently post-modern, something Noir in Festival has feted again and again with its usual verve. This year in particular, that fragmentation will be the leitmotiv of an edition that is special by its very nature: the program will be split up and spread over three months; access to the event will be part-remote and partly in person; and the themes Noir takes on will be shards of memory, a backward glance over its history that makes time-old questions newly relevant."
"The explosive imagery of Mario Alberti," declare directors Giorgio Gosetti and Marina Fabbri, "is not just a superb homage to films and novels that have made noir history, beloved by us all. It also conveys in a marvelously contemporary fashion the feeling of precariousness in these trying times and the ‘cracks’ in our reality we see very day. Indeed, we like to think that, today more than ever, art is like a kintsugi vase, mending the cracks between audiences and the world around them and piecing together a representation of reality that reinterprets it. Which is exactly what we hope to do over the course of this thirtieth anniversary edition, which looks back over our past while launching confidently into the future."
Moved to the beginning of March 2021 due to the ongoing coronavirus pandemic, the program for the thirtieth Noir in Festival will be spread out over three months this time around, featuring interviews and talks on social networks, other online initiatives and new website that will include a first-time "Noir Archive", all in the lead-up to March. Online events have already started, under the aegis of the Giorgio Scerbanenco Award: after readers cast their votes for the 17 books on the longlist, there will be five talks with the finalists, right up to the announcement of the winner on December 4th.
Mario Alberti is a comic book artist, an illustrator, and a scriptwriter. He cut his teeth on Fumo di China magazine, with the series Holly Connick in 1992. Starting the same year, he worked with the comic magazine L’Intrepido, and in 1993 he joined the staff of the comic book Nathan Never, published by Sergio Bonelli Editore. In 2002, Alberti broke into the French market with the series Morgana, published by Les Humanoides Associés, which would be followed by the series Redhand, Mortemer for Soleil and Les chroniques de legion for Glenat. Starting in 2007, Alberti created several covers for DC Comics, Marvel and IDW, and in 2009 Marvel published his miniseries Spider Man & X Men, which he followed up with another miniseries, Spider Man & The Fantastic Four. Also in 2009, he had a hand in the 600th issue of Amazing Spider Man. His series Cutting Edge started appearing in France in 2013, scripted by Francesco Dimitri and published by Delcourt, eventually a four-volume series published in Italy by Panini. He alternated between comics and a variety of illustrations for Ducati, Trieste Science + Fiction Festival, and Cross Cult, among others.
In 2016, Alberti won the ILM Art Department Challenge on artstation.com, and the Giacomo Pueroni Prize for best science-fiction illustrator the following year. In 2017 he also drew the first comics in the new series Bandasenzanima, a spin-off of the series Dragonero by Luca Enoch and Stefano Vietti; he would join forces with Stefano Vietti again to create the new series Angie Digitwin for Panini Comics. In 2018, Alberti’s Tex  Cinnamon Wells came out, scripted by Chuck Dixon, and he took part in Panini’s project Angie Digitwin, drawing the first issue and the covers. In 2020, Glenat published the first volume of Le Mur in France; written and drawn by Alberti, based on an idea by Antoine Charreiron, it was published in Italy by Star Comics, which recently published the second volume, Homo homini deus, in October. 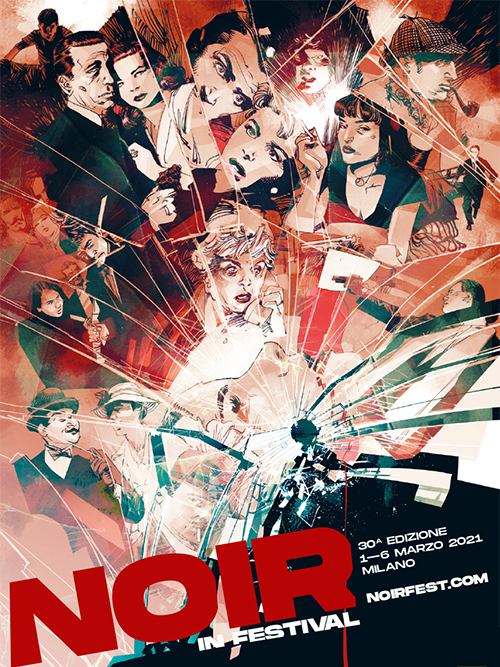