Marco Bellocchio receives an honorary degree from IULM University
by Carmen Diotaiuti, Cinecittà News
Marco Bellocchio’s first TV series ("and maybe my last, as well"), Esterno, notte, will have six episodes, and like his film Good Morning, Night, looks back at the kidnapping and assassination of statesman Aldo Moro. "A story that made an enormous impression on me," the director recalls after receiving an honorary degree in television, cinema, and new media from IULM University.
"Some on the left were against my making the film and they hated it. I realized this after I made it: some liked it, while others detested it. They had nothing against me; it was Moro they hated, ergo the film, too." In the series, Bellocchio reveals, the point of view will be flipped, with Moro’s hiding place seen from the outside, and real events and figures will be mixed with imaginary ones. "I like shifting the perspective: we were inside his prison and now we’re trying to get out, with a reverse angle shot, staying outside and tracking some of the figures linked to Moro in each episode. I’m fascinated by [former prime minister] Francesco Cossiga, who hasn’t really been studied enough. It was Moro who gave him his first appointment and got his career started, only for Cossiga to have to handle a situation that was terrifying. He would then go on to have a brilliant career. I’m also intrigued by Popo Paul VI, who was very close to Moro and did his best to get him freed, even putting together millions in ransom. Yet that wasn’t what the Red Brigades wanted this time, although they’d taken ransom money before. Another episode is devoted to Red Brigade members on the outside, one to Moro’s family, and the sixth and final episode addresses the tragic outcome of the case that we all know so well."
Marco Bellocchio recalls his student days and his first steps in filmmaking: "Before this degree today, I graduated in 1962 from the Centro Sperimentale di Cinematografia, with a degree in directing, and my grade point average was nothing to write home about: 25 out of 30. I had started studying acting, but then during an exercise for aspiring directors I’d proposed changing a scene, and the professor agreed to it. That’s when I realized I could convey my own personal vision that way and I gave up acting for directing - another reversal. I went on to make I pugni in tasca [1965] , and I was afraid for the images I had shot: they were particularly lovely and I feared my editing would ruin them, so I had a friend of mine do it. Later I learned how to control my fear, but even now, during shooting, I’m afraid I’ll get lost in all the images."
As for Gli occhi, la bocca, clips of the 1982 film were shown during Bellocchio’s talk. "We’ve been working on L’urlo for a couple of years now. It’s a more personal rendering of that tragedy; I didn’t feel free enough in Gli occhi, la bocca, and Lou Castel wasn’t really right for the part. An artist needs to be free, and I wasn’t at the time, or didn’t think I was, so this film reminds me of what ‘limits’ mean." By contrast, other terms with which Bellocchio identifies the most, he says, are ‘image’, ‘irony’ and ‘utopia’. "Irony comes to me naturally, and the grotesque, even in tragic situations. By the same token, the idea of utopia has always been very important to me in my life, not so much as dreams of revolt, which would be inconceivable, as an obligation not to give in to resignation.
"When I start from an image, that sets everything in motion. When we made Dormant Beauty, what drove me was my indignation over a parliamentary farce in which a majority wanted to stop the new bill [concerning end-of-life rights], and my admiration for Peppino Englaro [whose daughter had been in a coma for nearly two decades]. But to actually make the film, I had to find images. With all due respect for a film’s message, it’s the images that prompt me to spring into action."
Before Bellocchio was handed his honorary degree by the President of IULM, Gianni Canova, a video was shown containing congratulatory messages from the director’s colleagues and stars, including Maya Sansa ("I will be eternally grateful to you, I admire you, all the very best") and Toni Servillo, who confides on the screen, "Every time the theater goes dark and I’m about to watch a Bellocchio film, I know I’ll be watching something that is deeply disturbing - the result of visual associations that I could never have thought up myself. This is the value of an artist."
Another message comes from the director Marco Tullio Giordana, who observes that Bellocchio is just as youthful, like a teenager, with the same anger and desire to claw at reality as he was on his first film. Giordana dedicates an epigram by Eugenio Montale to the master filmmaker: "Sbarbaro, whimsical boy, folds multicolored papers and builds boats he consigns to the flowing ooze of a gutter; see them float away. Passing gentleman, look out for him; reach the fragile fleet with your walking stick and keep it from straying; guide it to a little harbor made of pebbles."
Condividi su 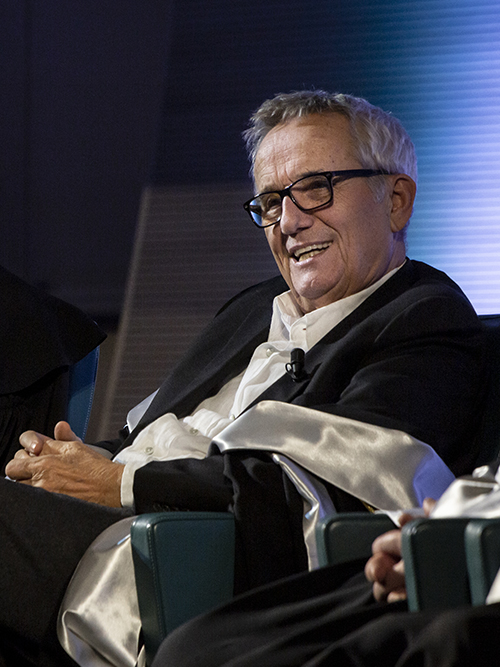