Carol, Orson, and me
Seeing the restored version of The Third Man on the big screen is an experience to be recommended. But seeing The Third Man and then hear Angela Allen, the very young editor’s assistant on that masterpiece, share a few anecdotes on the making of the film: that’s unforgettable. On the first day of Noir in Festival in Como, these two experiences, the screening and the talk with Angela Allen, came together, to the delight of Noir audiences.
Prompted by the questions put by Adrian Wootton (a genuine expert on the film), Allen talked about how much it had meant to her to work with Carol Reed, his presence on the set, and above all, Orson Welles: despite his appearing on the screen over an hour into the film, rumors have swirled ever since about Welles’ contribution to his role and his also directing the picture from behind the scenes, all of which only compounded the legend of The Third Man.
"Yes, it was very early on; I think I was eighteen or nineteen. I learned a tremendous amount working on that set. Reed was really my mentor. He taught me so much.
"And I was actually on the set in the second unit. And we were the unit that spent most of our time in the sewers, and on the wheel, because for the famous wheel scene, with Orson and Joseph Cotten my unit spent, I think I spent about two weeks going round and round on that wheel shooting plates and point-of-views of down below. Of course, in those days we didn’t have special effects or videos or any of those modern things."
Then it was time to talk about Harry Lyme, the "first man".
"Orson Welles, yes, he arrived rather late. They had to chase him round Europe. They had somebody and he was in Paris. So they sent somebody to Paris, the man got to Paris, and he’d gone to Rome. And so it went on. And he eventually arrived, but before he arrived, Guy Hamilton, who was the first assistant to Carol, he had to double him on a shot of a shadow running up the road. And Carol said, ‘Well, you’d better put a coat hanger in your coat because you’re much thinner than Orson."
"I can also say that we, the second unit, shot the very first shot he ever made in the film, which was walking towards the carousel on his way to meet him [Holly, the character played by Cotten] at the wheel. Orson did that in one or two takes, because he didn’t have any dialogue. But when it was time for him to go down the sewers, he saw both the actors and the crew eating bacon sandwiches, and went mad, and said, ‘It’s disgusting! How can they eat in the sewers?’ And he refused to ever go down the sewers again, and they had to build the sewer in London to do any other post-shots of him. A lot of that stuff in the sewer running is a double, because he wouldn’t do it."
As to the rumors of Welles being a shadow director on the film, Allen firmly dispelled them, one and all: "Yes, I had heard, and of course Guy Hamilton, who was very close to Carol, had heard these tales, and it is totally untrue, because when you see the film, Orson doesn’t make his entrance until about an hour into the film, so I don’t know how he was directing it, cause he wasn’t there."
In closing, Wootton asked Allen to share her favorite memories of making the film: "I think, looking back, it was just after the war and it was my first time abroad, and working with Carol, who, as I said, I thought of him really as a sort of mentor. I mean, there’s no particular scene that I can recall that stands out, but one shot does stand out to me: shooting in the sewer, under, I think, the Hofbrau Palace, and Carol was there for this particular shot, and a waiter in the full black apron with a silver salver coming down the spiral staircase in the sewers to give Carol his cup of coffee. And that definitely imprinted itself on my memory."
Condividi su 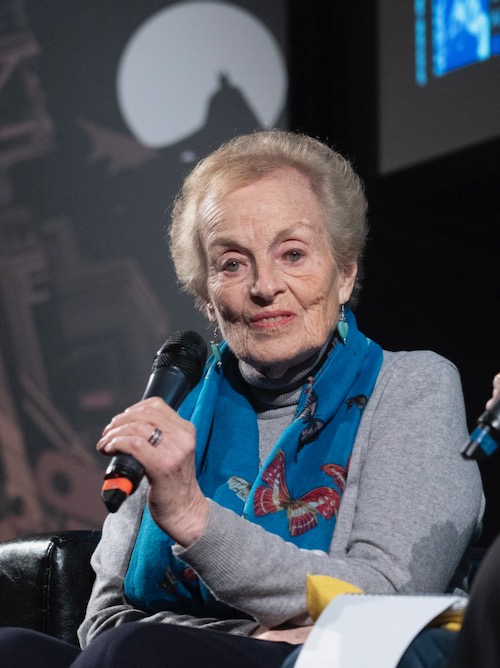