Batman owns our poster
The 29th annual Noir in Festival unfolds in Como and Milan on December 6-12 this year. After announcing the winner of the Raymond Chandler Award, Jonathan Lethem - a genuine master of the thousand shades of ‘noir’, be they literary or cinematic - Noir provides an advance look at other events in the offing for 2019.
For starters, there’s the premiere of one of the quirkiest Italian film noirs of the season, Gli uomini d’oro by Vincenzo Alfieri (starring Fabio De Luigi, Edoardo Leo, Giampaolo Morelli, Giuseppe Ragone, Mariela Garriga, Matilde Gioli, and Susy Laude, along with Gianmarco Tognazzi). Produced by Fulvio and Federica Lucisano for Italian International Film, with Rai Cinema, and distributed by 01 Distribution, the film will be vying with the other six finalists for the Caligari Award for best Italian film noir, all at the IULM University in Milan.
And to celebrate the 80th anniversary of an iconic character’s first appearance (in May 1939, on the pages of Detective Comics, courtesy of Bob Kane and Bill Finger), as well as the 30th anniversary of Tim Burton’s film Batman (1989), this year, for its official poster, Noir in Festival has tapped Batman, legendary comic book and screen hero (soon to spring into action in a new film adaptation The Batman, directed by Matt Reeves, starring Robert Pattinson).
After the virtuoso revisitation of zombies for Noir’s 2018 poster by Gigi Cavenago, this year another master comic book artist has been enlisted to design the festival’s poster: Lorenzo De Felici. A colorist for publisher Sergio Bonelli Editore and Walt Disney America, illustrator and co-creator, with Robert Kirkman (The Walking Dead) of the comics series Oblivion Song, De Felici has taken one of the most iconic moments in the genesis of the Batman myth, the trauma of the murder of the superhero’s parents, and filtered it through his own sensibility: against the backdrop of a gritty Gotham City, the set of a film noir features Bruce Wayne/Batman as both star and spectator.
"It was certainly a most extraordinary stroke of genius on his part," declare Noir directors Giorgio Gosetti and Marina Fabbri. "Lorenzo came up with the image months before the box office hit Joker, and prefigured one of its memorable sequences. Above all, in our view, what this image shares with the Todd Phillips film is the overall sense of a world more and more fractured between fiction and reality and between good and evil, all distinctions blurring and dissolving under the lights of a night peopled with heroes and nightmares. Noir 2019 takes its cue from these very shades of noir in the reality that surrounds us."
There are six films on our competitive lineup this year, with some of the finest international premieres this season, and six films on the shortlist for the Caligari Award for the best Italian film noirs of the year, an honor organized jointly by Noir in Festival and IULM University. An international jury will be deciding the winner of the international competition, while a people’s jury made up of a hundred filmgoers, coordinated by three film personalities or film critics, will be picking the winner of the Caligari Award.
As always, noir novels share pride of place on the program, featuring talks with Noir in Festival guests slated to take place both in Como (at the gorgeous Villa Olmo) and in Milan (thanks to a collaboration with the Feltrinelli bookstore in Piazza Duomo and the IULM campus). Along with Jonathan Lethem, the following authors have confirmed their attendance: Gianrico Carofiglio, Piernicola Silvis, Gino Vignali, Maurizio De Giovanni, and Giancarlo De Cataldo, along with the fabulous five finalists for the Giorgio Scerbanenco Award for best Italian noir novel of the year. Guest of honor in 2019: Swedish novelist Hǻkan Nesser, rising star of Scandinavian best-selling noirs, whose novels inspired the film trilogy Intrigo all directed by Daniel Alfredsson (who also helmed the last two films in the Millennium trilogy), premiering at Noir in Festival.
Lastly, in collaboration with Noir in Festival, on December 6-8 in Como, AGICI Association of Independent Film Producers) is holding its MICI19, the annual international meeting for independent film under its president Marina Marzotto. The event features a three-day program of events, pitches and film and audiovisual proposals in the noir vein, along with international co-productions. This year the guest of honor is Switzerland, thanks to a collaboration with the Ticino Film Commission. 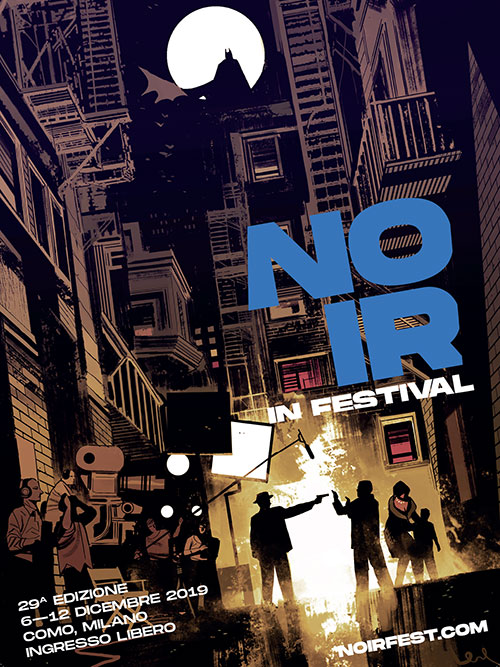