L’UOMO DEL LABIRINTO - INTO THE LABYRINTH
by Donato Carrisi
Italy, 2019, 130’, color, DCP
screenplay
Donato Carrisi
taken from the novel of the same name by
Donato Carrisi
cinematography
Federico Masiero
editing
Massimo Quaglia
music
Vito Lo Re
production design
Tonino Zera
costumes
Patrizia Chericoni
cast
Toni Servillo [Bruno Genko]
Dustin Hoffman [Dottor Green]
Valentina Bellé [Samantha Andretti]
Vinicio Marchioni [Simon Berish]
Caterina Shulha [Linda]
Orlando Cinque [Bauer]
Filippo Dini [Delacroix]
producers
Maurizio Totti
Alessandro Usai
productions
Gavila
Colorado Film
in collaboration with
Medusa Film
world sales
TF1 Studio
A young woman wakes up in a hospital bed. She has a broken leg, she is also disoriented and can’t remember anything. The room she is in has no windows, only a huge mirror lining one wall, although she can’t see her reflection in it. With her is a man who introduces himself as Dr Green, a criminal profiler. He explains to the girl that her name is Samantha, that she has been kidnapped and kept prisoner, but managed to escape, and that his job is to find the kidnapper. However, the hunt will not take place in the outside world, but in Samantha’s mind. White reveals to Samantha that she is no longer thirteen, which was her age when she was kidnapped, but twenty-eight. With his help, she gradually starts to recall certain episodes from her captivity. In a city overcome by a ferocious heatwave, where the people have taken to sleeping during the day, and leaving their homes only at night, a private detective called Bruno Genko, who has spent years investigating Samantha’s disappearance, learns of her liberation. Now, stricken with a heart disease, the detective has only two months to live, but nonetheless, he takes up the hunt once more.
"When I saw the final cut for the first time, I was surprised: it was extremely colorful and nagged at my mind. Which is the thing that shocked me: the film hadn’t come out of my head: it was trying to get into my head. When you find yourself doing something that is really your own idea, and put it on the screen, you believe you are the creator of the whole thing and you can control the material. Instead that same material suddenly takes control over you. I do hope audiences will have the same experience." [Donato Carrisi, interviewed by Carola Proto, www.comingsoon.it]
After Donato Carrisi (Martina Franca, 1973) graduated from law school, writing his thesis on the criminal known as the "monster of Foligno", he started writing plays and working on screenplays for TV series and made-for-TV movies, such as Casa Famiglia (2001), Nassiryia - Per non dimenticare (2007), Squadra antimafia - Palermo oggi (2009), and Moana (2009). His first novel, The Whisperer (2009) became a bestseller and was sold in over twenty countries. Carrisi wrote and directed the screen adaptation of his novel The Girl in the Fog (published by Longanesi in 2015); the film of the same name was the pre-opening event at the 2017 Rome Film Festival. This directorial debut earned Carrisi a David di Donatello for Best New Director. The same year, he published the novel Into the Labyrinth (upcoming in English), the adaptation of which would become his second directorial effort in 2019.
2019 L’uomo del labirinto
2017 La ragazza nella nebbia 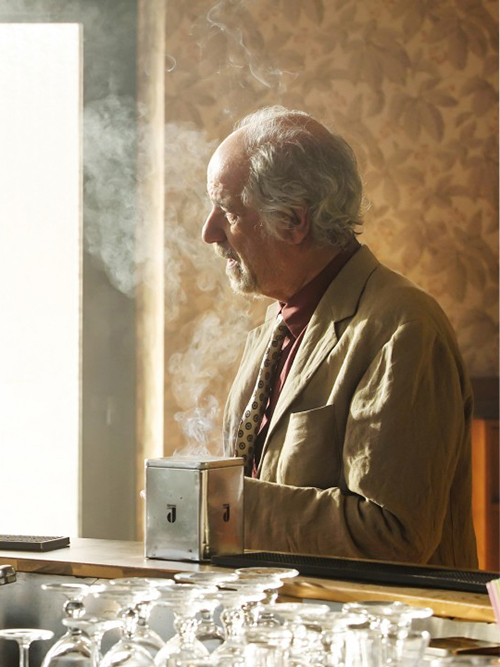