5 È IL NUMERO PERFETTO - 5 IS THE PERFECT NUMBER
Italy, Belgium, France, 2019, 100’, color, DCP
screenplay
Igort
taken from the graphic novel of the same name by
Igort
cinematography
Nicolaj Brüel
editing
Esmeralda Calabria
Walter Fasano
in collaboration with
Jan Hammeuw
music
D-Ross & Startuffo
sound
Daniele Maraniello
production design
Nello Giorgetti
costumes
Nicoletta Taranta
cast
Toni Servillo [Peppino Lo Cicero]
Valeria Golino [Rita]
Carlo Buccirosso [Totò ‘o Macellaio]
Iaia Forte [Madonna]
Giovanni Ludeno [il gobbo]
Lorenzo Lancellotti [Nino]
Vincenzo Nemolato [Mr Ics]
Nello Mascia [Il dottore]
producers
Marina Marzotto
Mattia Oddone
Elda Ferri
productions
Propaganda Italia
Jean Vigo
with Rai Cinema
co-producers
Peter De Maegd
Tom Hameeuw
Jan Hameeuw
Antoine De Clermont-Tonnerre
Raphael Berdugo
Patrick Sibourd
co-productions
Potemkino
Mact Productions
Cité Films
Nour Films
with the support of
MiBACT
in collaboration with
Playtime
in association with
Banca Patrimoni
Sella & C
world sales
Playtime
Peppino Lo Cicero, a former hitman for the Camorra, comes out of retirement after his son is assassinated. This tragic event sets in motion a chain of violent reactions and counter-reactions; it's the spark that ignites Peppino's new life. The film is a Neapolitan take on 1970s Italy. 5 Is the Perfect Number is a tale of friendship, betrayal and revenge, and, at bottom, a story of second chances and rebirth.
"They've been trying to make a film based on this graphic novel of mine ever since 2004. Several directors have toyed with the idea of a live-action adaptation, while I, long-time film aficionado, have changed my mind over the years about directing it myself. At first, that prospect didn't interest me at all. Then, over time, after Toni Servillo suggested I direct the film version, the idea started to make sense to me. I had never directed a film before, yet my experience creating comic books had left me with a quite specific concept for the project. For me, cinema is the new frontier: a challenge that rounds out my other roles as a storyteller and musician." [Igort]
Igort has worn many hats since the 1970s: comic book artist, illustrator, author and musician. He is active all over the world and his works have been published in twenty-six countries, while his artwork has been exhibited in New York, Tokyo, Paris, Geneva and Milan, and his drawings turned into fabrics, clothing, sculptures and toys. In the field of music, Igort's albums with different bands have been released throughout Europe. In 2000 he founded the publishing house Coconino Press, which would publish his graphic novel 5 Is the Perfect Number two years later. He also writes novels and screenplays. In 2016 he received the Premio Napoli for his contribution to the spread of Italian culture around the world. He divides his time between Paris and his native Sardinia.
2019 5 è il numero perfetto 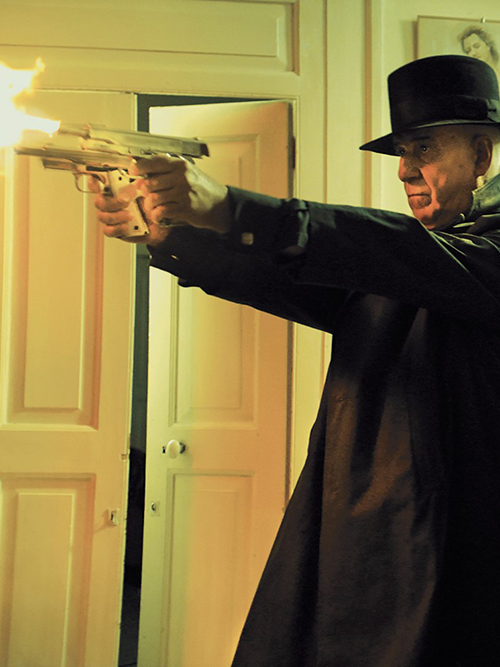